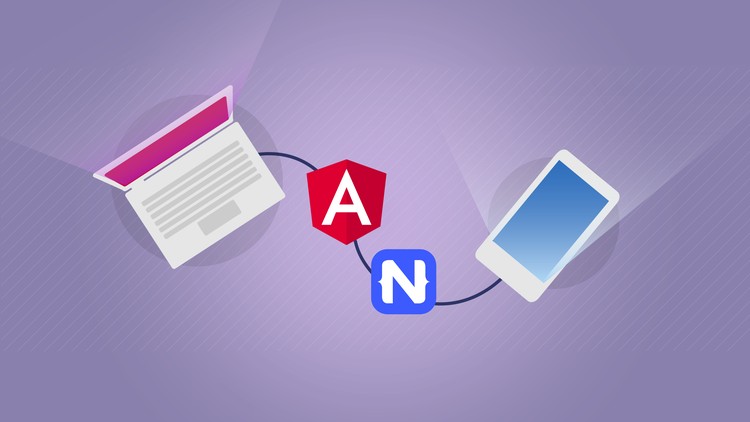 Use one Angular + NativeScript codebase to build native iOS, Android and web apps and learn NativeScript from scratch.

With Angular, you can already build highly reactive and engaging web apps.

Wouldn’t it be amazing to use that same tech stack and knowledge to build real native mobile apps for iOS and Android?

NativeScript enables you to do exactly that!

You build a normal Angular app and manage your entire app logic via Angular + TypeScript. Combine that with NativeScript’s TypeScript/ Angular modules and the strong NativeScript build system to generate Android and iOS apps which you can (and will in this course) deploy to the Apple App Store or Google Play Store.

But even better than that: You’re also able to use that same “Native App with Angular” codebase to build a regular web app out of it as well.

In this course, you’ll learn:

To succeed in this course, Angular knowledge is a must-have. You need to know how Angular works, how you build and use components, what dependency injection is and how it works and how the general Angular architecture (with NgModule etc) works.

A brief refresher on some Angular core concepts is provided but if you got zero Angular knowledge, you’ll very likely not be able to follow along.

You absolutely DON’T have to be an expert though!

I’d love to welcome you in the course!

Recently, we have been getting very low reveue. Mainly because of invalid clicks(People who click on our ads but do not interact with the ad pages. Google knows this and then cuts our revenue). We also got a lot of feedback on "too many ads" but please understand the more you interact with the site and ads, the better we can serve you guys. Thank you for your feedback tho!
AndroidAngularCodebaseNative iOSNativeScriptweb apps
0
Share FacebookTwitterReddItWhatsAppPinterestTelegram
You might also like More from author
Development