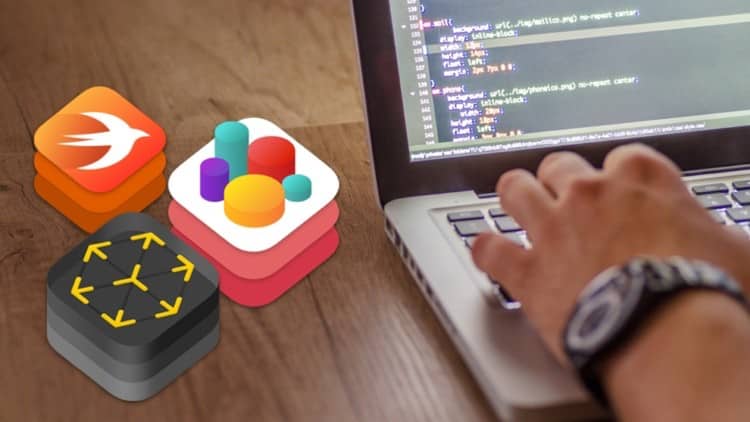 ARKit was launched in June 2017 by Apple and instantly became the largest AR platform with 350 million compatible devices. ARKit makes it much easier for developers to code augmented reality apps than ever before.

Learn the future of programming with ARKit today and be in demand!

AR is disrupting the world and will become mass market very soon. Don’t wait for the crowd, be a leader and innovator in this new exciting field :

SO WHAT WILL YOU LEARN?

This course will teach you :

● How to design 3D objects, and text with and without code

● Physically based rendering for realistic appearance

● How to use Scenekit’s built in Physics engine

You can try all the ARKit projects you will learn right now on your device. Look for “Augmented Reality App” on the App Store.

All source codes and 3D design materials are included and easy to re-use in your commercial appsand projects – This will save you countless hours, which is priceless
Furthermore, you will learn the key concepts of good user experience in Augmented Reality apps!

People are hungry for amazing AR experiences but today there is a lack of “killer AR Apps” on the App Store. This is a huge opportunity to get in early before it becomes a crowded space!

Big brands are looking for skilled ARKit developers as augmented reality is already available on 380 million iOS devices, but the technology is so new that there is a lack of trained ARKit iOS developers.

AR Games are gaining in popularity since Pokemon Go, but even in gaming, there is a shortage of good AR apps that people are raving about. What is your app idea? Could it make you the next app millionaire?!

CREATE THE APPS OF THE FUTURE

After completing this course, you will be ahead of the game! The Mobile AR Market is about to grow exponentially, so you will be in a great position to dominate the AR app section of the AppStore and hopefully make your creative ideas come to reality within a few weeks thanks to ARKit.

ARKit is here to stay, and we are only at the beginning as all the big brands are investing heavily in Augmented Reality platforms. Apple is betting big on ARKit and wants to feature your awesome ARKit apps as soon as possible!

WHAT WILL YOU BUILD?

Introduction to SpriteKit in a simple section. Learn how to use SpriteKit with ARKit to display simple 2D elements like text and emojis.

Augmented Reality programming can be daunting at first sight but this course will give you the confidence to build your  own AR apps and grow your coding skills using Apple’s latest and hottest framework ARKit, step by step, at your own pace.

● We will throw fireballs to Destroy a pyramid of bricks, right from your living room!

● We will build a portable hole like in Roger Rabbit! (that one is a challenge actually, are you up for it?)

● We will create and animate a 3D Face using Apple’s latest hardware : the iPhone X, Xs, Xs Plus or Xr and perform AR on the selfie camera on people’s face like in Instagram stories and Snapchat. We will learn how to use camera filters and lenses to interact with people’s live emotions.

If you read all the way to this line, you know this is the right course for you! And after all, there is no risk as you can ask a full refund with 30 days if the course is not for you… I’m sure you’ll love it though! I had so much fun recording it and can’t wait to see what you build too!